Orthodoxy and the Challenge of Biblical Criticism

The tzimtzum paradigm which was developed in kabbalistic writings in the modern period has produced several models that are fruitful for our discussion. Although typically articulated in esoteric terminology far removed from the understanding of the ordinary believer, these models and the theological concept which they share, have exerted much unacknowledged influence on various forms of traditional Jewish belief and practice in modern times.

Common to all of these models is a unique mix of realism and non-realism that transfers the question of God’s relationship to the world from the realm of ontology to that of epistemology. In their struggle to acknowledge the mediating role of human perception while at the same time defending a view that makes claims upon how “faith in God” should be conducted in actual practice, I believe these models have much to offer in resolving the self-aware constructivist’s theological dilemma. But this potential is best appreciated against the background which led to their formation. 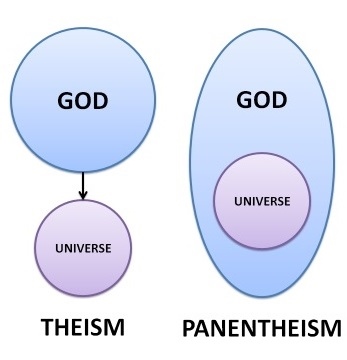 In the popular image, Judaism is customarily viewed as the classical prototype of theistic religious belief, picturing God in personalistic terms as a superior Other who stands over and above the world. Nonetheless, even a cursory survey of Jewish thought over the ages problematizes this conception, beginning with biblical images of God as dwelling and controlling the world from within as well. The occasional rabbinic references to divine immanence fortifies this more nuanced picture.[1]

It appears safe to say that traditional Judaism has consistently resisted any strict form of deism [2] which contends that God created the world, but abstains from any subsequent functional contact with it,as well as versions of extreme pantheism, according to which the world and God are one.[3] Beyond this, however, the trajectory of Jewish theology might be more accurately depicted as a restless zigzag, persistently seeking – as it were – to accurately calibrate a precise Archimedean point between the classical theistic picture and a more panentheistic model, which contends that the world exists within God, but that God is more than the world.

If the influence of Aristotelian rationalism and Maimonides’ negative theology moved biblical and Rabbinic theism to even greater extremes of transcendence and distance from human affairs, the group of medieval Jewish kabbalists merging gnostic themes in classical Jewish mysticism with neo-Platonic notions swung the pendulum in the opposite direction. This group developed an almost dualistic vision of the deity, which distinguished between God as Godself, and God in God’s manifestations.[4]

According to this conception, the Ein sof (or Infinite One) is so unfathomable that this aspect of God is not even mentioned in the Torah.  God in God’s manifestations, by contrast, is the God of religion, who created the world in an emanative process, whereby a series of increasingly material and particularized reflections of God’s essence emerged in linear fashion from their source, in a process similar to the earthly phenomenon of birth.

While this two-tiered view allowed the Kabbalists to protect God’s transcendence and inscrutability even more zealously than Maimonides on the one hand, it nevertheless moved traditional monotheism closer to pantheism on the other, allowing them to depict God’s various manifestations in decidedly worldly terms, as partaking in all aspects of human vulnerability and need.

A significant new twist to the trajectory between immanence and transcendence was introduced with the 16th century doctrine of Tzimtzum as developed by Rabbi Isaac Luria.  In contrast to his medieval predecessors who carefully avoided any reference to process within the Ein sof itself, Luria allowed himself to violate this original taboo. He suggested that just as any living organism must inhale before exhaling, or break open its shell in order to reveal the kernel of fruit within, so too must the emanative process of creation be preceded by an act of contraction on the part of the Ein sof in order to create space for a finite worldly reality that is other than God.

The substance of creation emanates – as in classical Kabbala – in the form of a gradually diminishing ray of light stemming from the Ein sof itself.  This would ostensibly lead Lurianic kabbala to reiterate a panentheistic picture of God-world relations.  Nevertheless, the fact that this ray of light  is clearly demarcated from the Ein sof by the circle of empty space – or Tzimtzum – surrounding it, enabled a partial return to theism. Even within this more circumscribed stance, greater fine-tuning of the pantheistic-theistic spectrum was engendered by Luria’s students, who exhibited varying degrees of interest in preserving substantive differences between the Ein sof and the finite world of creation which emerged out of the void.

Thus, for example, R. Hayim Vital displays interest in downplaying pantheistic motifs, by portraying the act of Tzimtzum as an act of free will and the resultant void as absolutely clean of the original divine presence.  R. Israel Sarug, by contrast, depicts Tzimtzum as an involuntary act of catharsis prompted by the need to rid the divine life of the roots of evil and limitation. Sarug introduces the notion of the reshimu – a residue of the original unpurified divine reality which inevitably remained in the void, much as drops of oil cling to the sides of an emptied vessel.  It is from this residue that vessels were formed, in order to contain and delineate the subsequent emanations of divine light that, at its end point, constitute our this-worldly reality.[5]

For our purposes, this brief historical sketch of Jewish vacillation between theism and panentheism is merely the preamble to a far more rarefied development in our theological odyssey, which stemmed from an 18th century offshoot of Lurianic Kabbala. This offshoot has yielded several highly sophisticated models of God and His relationship to the world that might be very fruitful for our discussion.

[1] Such as the statement that “God is the place of the world, but the world is not the place of God” (Bereshit Rabba, 68:9), which appear to expand upon the words of the prophet that “the earth is filled with His glory” (Isaiah 6:3).

[2]  Beyond that of the proverbial watchmaker who controls the creation through the original implanted mechanism.

[1] Such as the statement that “God is the place of the world, but the world is not the place of God” (Bereshit Rabba, 68:9), which appear to expand upon the words of the prophet that “the earth is filled with His glory” (Isaiah 6:3).

[2]  Beyond that of the proverbial watchmaker who controls the creation through the original implanted mechanism.

Prof. Tamar Ross is Professor Emeritus of the Department of Jewish philosophy at Bar Ilan University. She continues to teach at Midreshet Lindenbaum. She did her Ph.D. at the Hebrew University and served as a post-doctoral fellow at the Center for Jewish Studies at Harvard. She is the author of Expanding the Palace of Torah: Orthodoxy and Feminism. Her areas of expertise include: concepts of God, revelation, religious epistemology, philosophy of halacha, the Musar movement, and the thought of Rabbi A.I. Kook.

Prof. Tamar Ross is Professor Emeritus of the Department of Jewish philosophy at Bar Ilan University. She continues to teach at Midreshet Lindenbaum. She did her Ph.D. at the Hebrew University and served as a post-doctoral fellow at the Center for Jewish Studies at Harvard. She is the author of Expanding the Palace of Torah: Orthodoxy and Feminism. Her areas of expertise include: concepts of God, revelation, religious epistemology, philosophy of halacha, the Musar movement, and the thought of Rabbi A.I. Kook.

God's Flaming Fiery Anger
Dr.Deena Grant
The Practice of Divination in the Ancient Near East
Dr.Uri Gabbay
Reintroducing the Myth of the Fallen Angels into Judaism
Prof.Rachel Adelman
Reading the Plagues in their Ancient Egyptian Context
Prof.Gary Rendsburg
Symposium:More Responses
No items found.

Difficulties for the Modern Believer
Heterodox Responses
Orthodox Solutions Thus Far
The Linguistic Turn: A New Direction in Religious Thinking
Rabbi Joseph B. Soloveitchik: Questioning the Centrality of Empirical Data
Prof. Yeshayahu Leibowitz: Torah from Sinai as a Normative Statement
In the Footsteps of Leibowitz: Kasher, Levinger, Goldman and Schwartz
Shortcomings of Metaphysical Minimalism: James Kugel
Myth of Origin and Narrative Theology: Rabbi Norman Solomon
Post-Liberalism and "As If" Beliefs
Post-Liberalism as the Ultimate Safety Net for Classical Religion in the Modern World
Is the "As If" Approach Sufficient to Maintain Firm Religious Commitment?
Is a First-Order Constructivist Theology Possible?
Tolerating the Fragility of Theological Constructs: Does Self-Awareness Make Them Too Fragile?
Traditional Concepts of God and Kabbalistic Interpretation: An Overview
The Doctrine of “Tzimtzum Shelo Kepshuto” and Its Power
The Potential Contribution of the Allegorical Interpretation of Tzimtzum to the Dilemma of Post-Liberal Theology
The Problem of Relativism and Rav Kook's Concept of "Perfectible Perfection"
Bringing It All Together: The Interactive Paradigm of Divine-Human Relations & Conclusion
Excursus – Wittgenstein's Anti-Scientistic Conception of Philosophy: Two Stages