The elaborate garments worn by the priests figure prominently in the Torah portion Tetzaveh, filling the entirety of Exodus 28. They are described again in detail in Pekudei (Exodus 39:1–31), where they conclude the account of the actual manufacture of the components of the miškān (“Tabernacle”) that is said to have accompanied the Israelites through the wilderness.

Four of these garments are worn exclusively by the High Priest. They alone are called בִּגְדֵי הַקֹּדֶשׁ, the holy garments. Moses first places them upon Aaron at the consecration of the priests (Leviticus 8:7–9). Aaron wears them until his death, transferring them to his son and successor Eleazar immediately before he dies (Numbers 20:25–28). All successive High Priests are commanded to wear them as well (Exodus 29:30; see Leviticus 21:10).

Together with the entire account of the miškān, all of the references to the priests’ garments belong to the narrative contained in the Priestly document, or P. They are not mentioned in the other Torah sources, although one feature, the enigmatic Urim and Thummim, is mentioned in Moses’ blessing of the tribe of Levi (Deut 33:8) – probably a part of the J source. Outside of the Torah, non-priestly texts occasionally mention an ephod (1 Samuel 2:28; 14:3; 21:10; 23:6,9: Judges 8:27; 17:5 18:14–20 etc.), as well as the Urim (1 Sam 28:6) and Thumim (Septuagint to 1 Samuel 14:41), but the full list is peculiar to P, and so is the insistence that certain ones are worn by the High Priest alone.

The fact that the garments are included in the instructions for the building of the miškān and its furnishings and in the account of their manufacture indicates that they were not thought of as items belonging to the priest but rather as sacred equipment, appertaining to the miškān and only used there. Indeed, they are explicitly designated for use לְשָׁרֵת בַּקֹּדֶש “when serving in the sanctuary” (Exodus 28:48; 29:30 etc.). The list of materials needed for the sanctuary (Exodus 25:1–7) includes the precious stones required for the ephod and breastplate. Further, the fabric portions of the garments were made of the same materials, and fashioned in the same manner, as the fabrics in the miškān itself, with those used to make the High Priest’s garments identical to those used in the most sacred sections of the miškān.

The four garments peculiar to the High Priest are unlike any normal articles of clothing. Their shape and design show that they are not intended to provide protection from the elements or to fulfill the requirements of modesty. In addition to fabrics, they contain gold and precious stones. On three of them, words are inscribed. Their weight and the manner in which they are placed on the High Priest’s body render them neither practical nor comfortable. The High Priest is said to “wear” them only when he enters the sanctuary interior, which he is commanded to do twice daily, morning and evening. Most important, each one of the High Priest’s “garments” is said to function in a specific way whenever the High Priest enters the sanctuary “wearing” it.

The Functions of the High Priest’s Garments

The ephod’s precious stones, inscribed with the names of the twelve tribes, are said to serve as אַבְנֵי זִכָּרוֹן “stones of reminder” to remind God of Israel, and the same is true of the twelve stones on the breastplate. Thus by his very person, which we might call the “body politic,” the High Priest personifies the whole of the Israelite people 'לִפְנֵי ה “before YHWH,” i.e. when standing in God’s presence (Exodus 28:12, 29; 39:7).

The Urim and Thummim, connected with the breastplate, enable Aaron, each time he enters the sanctuary, to inquire of God for judgment (Exodus 28:30), which probably means in order to ascertain the correct decision in legal proceedings.

The robe is “worn” for its bells, their sound alerting the divine presence to Aaron’s approach as he enters the sanctuary “so that he not die” (Exodus 28:35) – which might happen if he were to disturb the divine repose too abruptly.

Finally the diadem on Aaron’s head is said to remove from God’s abode any wrongdoing connected with Israel’s offerings and to ensure, by means of the inscription proclaiming that Israel’s worship is 'קֹדֶשׁ לַה “Holy to Yhwh,” that God graciously accept (that is the meaning of רָצוֹן in P) their sacrifices (Exodus 28:38).

When one considers the daily ritual acts involving these “garments,” it becomes clear that in P they are not viewed as apparel at all. They are called בְּגָדִים, “garments,” and technically they are – but only because the High Priest bears them on his person. Essentially, they are ceremonial, ritual objects. They transform the High Priest who “wears” them into a walking embodiment of the whole nation of Israel, and they play indispensable roles in the regular (note the repeated use of the word “tāmîd”) pageant of worship that he enacts on Israel’s behalf.

Consider these actions along with the other tasks the High Priest is instructed to execute each morning and evening in the sanctuary – attending to the lampstand to ensure that the sanctuary’s interior is illuminated all night long, and offering incense to provide a fragrant aroma – and his weekly presentation and removal of twelve loaves. All of these rituals are predicated on the sanctuary being God’s dwelling place (which is the meaning of the word miškān): the precisely delineated, extravagantly outfitted earthy location where His terrestrial manisfestation, His kābôd, resides.

Taken as a whole, this complex of ritual acts is none other than a highly formalized way of perpetually attending to the abode, providing light, fragrance and refreshment and, in the course of doing so, directing the resident deity’s attention to His people’s needs and evoking His acceptance of their tribute – all the while taking care to respect His splendid isolation, never intruding unannounced.

The High Priest’s role in the daily worship of God as ordained by P, then, consists of the royal treatment of, and appeal to, the divine King in His earthly palace. The High Priest is the palace servant, and the garments that he wears are intended not merely to clothe him in “dignity and adornment” (Exodus 28:2) but to accomplish one of the essential aims of worship: to call the King’s attention to His subjects and their needs.[1]

Anthropomorphism in Worship: Then and Now

These ritually efficacious garments of the High Priest are just one aspect of P’s unique anthropomorphism, its depiction of God’s essence and behavior in strikingly human terms. Some readers of P, embarrassed by this frank and explicit “humanization” of God and viewing it as somehow pagan, have maintained that Israelite religion merely took over some of the conventional forms of worship practiced in the ancient world, and only as fossilized vestiges of a belief system that it no longer accepted. Others have pointed out that P has toned down anthropomorphism in many ways, by denying that the royal resident actually partook of the sacrifices and by insisting that it was God’s kābôd, but not God Himself, that was thought to reside in the Tabernacle.

Nevertheless, I think that the priestly author intended all of this all quite seriously, not figuratively or symbolically. He may even have believed that the visible Presence of God really swooped down from Mt. Sinai and entered the miškān (Exodus 24:16–18a; Exodus 40:34­–38); after all, miraculous appearances of God in clear view of human onlookers seem not to have troubled biblical authors as long as they are said to have occurred in the distant past. Even if he did not, he certainly recognized that the only way to worship a transcendent, supernatural deity is to “reduce” Him to earthly proportions and provide Him with recognizable human contours; otherwise no meaningful acts of worship can be devised. 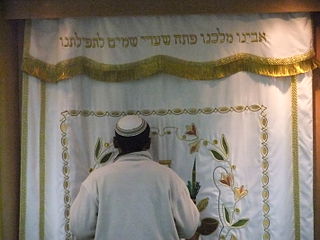 Many modern Jews seem inclined to view the statutory prayer that eventually replaced the “royal treatment of God in His earthly abode” as a step away from what they see as the crude anthroporphism of early times, and a step in the direction of more spiritualized worship. And yet, the notion of serving God by speaking to Him, in sounds forming human language, calling Him our “father” and “king,” addressing to Him words of praise and petition, words that He is imagined to “hear” as if by some auditory means, by which He is thought somehow to be moved or affected and to which it is hoped that He may react favorably – is this any less anthropomorphic than the silent tribute and supplication offered by means of the High Priest’s garments? Whether verbally or dramatically, to worship God apparently involves making Him (!) accessible, imaginable, familiar – in ancient times as in our own.

Shema Yisrael: In What Way Is "YHWH One"?
RabbiDaniel M. Zucker
The Tabernacle in Its Ancient Near Eastern Context
Prof.Michael M. Homan
When God Punishes Israel: What Will the Gentiles Say?
Prof. RabbiMarty Lockshin
Why Did Cain Kill Abel?
Dr. RabbiDavid J. Zucker
Symposium:More Responses
No items found.
No items found.