In the Priestly Torah and the Holiness School

The biblical word “kadosh” (holy) denotes something distinct and lofty. According to the Bible, kedusha[1] (holiness or sanctity) stems from God, who is sanctified and distinct from the created world. Anything closely connected to God receives its sanctity, kedusha, from the divine kedusha.

The sanctity of a place derives from the presence of God there. Thus, when God appears to Moses at the burning bush, that ground automatically becomes sanctified (Exod. 3:5). Once God’s presence leaves that place, it loses its sanctified status.

The Sanctity of Mount Sinai

The classic example of this phenomenon is Mount Sinai. When God descends there, the mountain becomes sanctified, and it is forbidden for the Israelites to touch it:

“Beware of going up the mountain or touching the border of it. Whoever touches the mountain shall be put to death” (Exod. 19:12; NJPS).

The mountain’s sanctity clings to whoever touches it, thus the Israelites are forbidden to kill the person directly: “no hand shall touch him, but he shall be either stoned or shot; beast or man, he shall not live” (Exod. 19:13). When the moment the revelation upon the mountain ends, and God leaves, its sanctity disappears and all are free to return and ascend it: “When the ram’s horn sounds a long blast, they may go up on the mountain” (Exod. 19:13).

The Sanctity of the Nazirite

The rules of the nazirite, which are part of the Priestly Torah (P or PT), offer an additional illustration of sanctity that is limited in time:[2]

2 If anyone, man or woman, explicitly utters a nazirite’s vow, to set himself apart for the Lord… 5 Throughout the term of his vow as nazirite, no razor shall touch his head; it shall remain consecrated until the completion of his term as nazirite of the Lord, the hair of his head being left to grow untrimmed. 6 Throughout the term that he has set apart for the Lord, he shall not go in where there is a dead person. 7 Even if his father or mother, or his brother or sister should die, he must not defile himself for them, since a crown (=hair) set apart for his Godis upon his head: 8 throughout his term as nazirite he is consecrated to the Lord.

PT’s nazirite is based on the Priest. Just as the anointed priest carries the “crown” (nezer) of sanctity—the oil—on his head (Lev. 21:11-12), and, therefore, is forbidden to become impure, so too the nazirite sanctifies his or her[3] hair and must avoid becoming impure through contact with corpses.

The sanctity of the nazirite derives from his or her unique connection to God rather than any connection to the Temple or priesthood. This is reflected in the locution “since a crown (nezer) set apart for his Godis upon his head.”[4]

In some ancient Near Eastern literature, the king is created in the image of a god and a divine crown is placed on his head.[5] The Priestly Torah took this first image and democratized it, claiming that it is the distinctive mark of humanity in general (Gen. 1:27, 5:1, 9:6). Similarly, with the nazirite, the motif of royalty reflected by the divine crown may now applied to any Israelite man or woman who takes the nazirite vow.

According to the laws of the Priestly Torah, priests become sanctified through a series of temple rituals,[6] after which the sanctity of the priesthood is transfered from father to son. In contrast, the Priestly Torah rules that the sanctification of the nazirite is not a permanent one, and that it ends with a Temple ritual (Num. 6:13-20). Since the sanctity of nazirites is connected to their hair, which symbolizes the crown of God placed upon their heads, shaving of the hair is a culmination ritual that brings this sanctity to an close (Num. 6:18). This too reveals the inextricable dependence of human sanctity upon God’s sanctity.

Sanctity in the Holiness School

Speak to the whole Israelite community and say to them: You shall be holy, for I, Yhwh your God, am holy (Lev. 19:2).

The Holiness School suggests in a novel manner that a mixture of worship ritual and ethics is part of the fabric of sanctity. The vast majority of the appearances of the concept of kedushain P are connected to technical religious rituals (the Tabernacle, the priesthood, sacrifices, Shabbat and holidays). In contrast, H utilizes the concept of sanctity for ethical commandments as well.

Ethical Sanctity: An invention of the Holiness School

The most prominent example of this novel approach comes from the opening of the Parashat Kedoshim, declares that all of Israel should be sanctified because their God is sanctified. This umbrella statement is followed by a list of many different commandments, some of which are ritually based, while others are ethical. The inclusion of ethics and justice in the category of sanctity, and the aiming of the call for sanctity towards the entire nation are interconnected ideas in the writings of the Holiness School. Once the concept of sanctity becomes relevant to the entire people of Israel, it is no longer limited to issues surrounding the sanctity of the Temple or the priesthood.

The Holiness School presents sanctity as the ultimate goal of keeping mitzvot. Yhwh, the sanctified God, separated Israel out from other nations to be God’s, thereby creating a special bond between God and Israel. This is expressed in the mitzvot that God gives Israel, and with these mitzvot God sanctifies the people. This is not a one-time act, wherein God grants Israel a permanent status of sanctity,[8] but is a constant process whereby God grants sanctity to a people who observe mitzvot.

Tzitzit is the Religious Symbol of Israel’s Sanctity 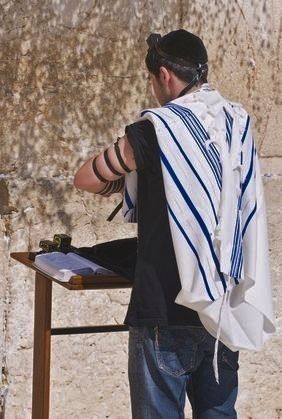 Tzitzit, fringes (Num. 15:37-41) are the ritual symbol of the sanctity of Israel according to the Holiness School. Their main purpose is to remind Israel of all of God’s mitzvot and the need to keep them; this then sanctifies Israel to their God.

Just as the Priestly Torah draws a parallel between the nazirite and the high priest, the Holiness school connects all Israel to the priests. Just as the gold frontlet, which is tied to blue cord, represents the fact of the anointed priest being “sanctified to Yhwh” (Exod. 28:36-37), so too do the tzitzit upon which a blue cord is also hung, testify to the requirement of Israel to be sanctified to their God.

[1] The word kedusha is post-biblical; I use it here to refer to the various biblical terms that use the root k-d-sh.

[4] The meaning of the word “nezer” in this locution is “crown,” not “the nazirite vow.”

[1] The word kedusha is post-biblical; I use it here to refer to the various biblical terms that use the root k-d-sh.

[4] The meaning of the word “nezer” in this locution is “crown,” not “the nazirite vow.”

Prof. Israel Knohl is the Yehezkel Kaufmann Professor of Bible at the Hebrew University of Jerusalem and a senior research fellow at the Shalom Hartman Institute. He holds a Ph.D. in Bible from Hebrew University. Knohl’s numerous publications include: The Sanctuary of Silence, which won the Z. Shkopp Prize for Biblical Studies and The Messiah before Jesus: The Suffering Servant of the Dead Sea Scrolls.

Prof. Israel Knohl is the Yehezkel Kaufmann Professor of Bible at the Hebrew University of Jerusalem and a senior research fellow at the Shalom Hartman Institute. He holds a Ph.D. in Bible from Hebrew University. Knohl’s numerous publications include: The Sanctuary of Silence, which won the Z. Shkopp Prize for Biblical Studies and The Messiah before Jesus: The Suffering Servant of the Dead Sea Scrolls.