The Bible has many festival lists. The core is always the shalosh regalim (the three pilgrimage holidays) with other holidays sometimes included. The prophet Ezekiel’s list (Ezek. 45:21-25) is unique: 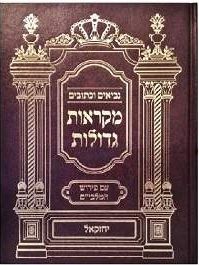 Ezekiel’s list includes the day of the Pesach sacrifice, the seven-day festival following it, and the seven-day festival in the middle of the seventh month (Sukkot). But there is something missing. The prophet Ezekiel, living in Babylonia in the sixth century BCE, fails to include Shavuot in his calendar of festivals!

Why did Ezekiel leave out Shavuot? Was he just dealing with seven-day holidays? Did he not know about it somehow? Was it not celebrated in Babylonia in his time, or did he envision that in the future it wouldn’t be?

Although I can’t answer the question, let me suggest that the absence of Shavuot in Ezekiel may be a reflection or a consequence of one of Shavuot’s strange features: it is the only regel (pilgrimage festival) without a story in the Torah.

Rabbinic Jews observe the festival of Shavuot as a holiday commemorating the anniversary of the giving of the Torah (or more precisely, the revelation of the Decalogue) by God on Mount Sinai. Shavuot is referred to by the descriptive name זמן מתן תורתנו, the time of the giving of our Torah.

That is not, however, the nature of the holiday as described in the Torah. Shavuot was observed as the festival of the wheat harvest, Chag HaKatzir (Exodus 23:16) or a day for bringing first-fruits to the Temple, Yom HaBikkurim (Numbers 28:26). The dominant theme in every Scriptural passage pertaining to Shavuot is the agriculture of the Holy Land.

Shavuot the harvest holiday would have been the one with which Ezekiel was familiar, since Shavuot the anniversary of the Torah doesn’t begin to appear until the Second Temple period. But why did it appear?

I propose that the reason Shavuot became associated with revelation in the Second Temple period is that it needed a backstory; otherwise, once the exile began and many Jews were living in Babylon, agricultural holidays based on Israel’s seasons would have little resonance with the people. Even in Second Temple Judea, the basic economy was much more city-based and mercantile than in the First Temple period, so even there a purely agrarian focus might fall a bit flat. In short, as an agricultural holiday that glorifies the produce of Eretz Yisrael, Shavuot did not speak to the reality of Jews residing in the diaspora or even in the crowded alleyways of Jerusalem.

The solution to this problem laid lies in the confluence of a few related facts about Shavuot that allowed its connection with the account of the revelation at Sinai.

1. It has no date. The Torah only says to count 50 days (or seven weeks) from the day of the Omer offering, whose date is disputed.
2. The holiday will fall out in the third month (Sivan).
3. The revelation at Sinai happened in the third month, although no exact date is given.

The almost perfect combination provided Shavuot with a much-needed story. The dateless Shavuot is in need of a story, and the uncommemorated revelation could use a holiday—and both are associated with the third month. To see how this process of historicizing Shavuot occurred, we should start at the beginning.[1]

The earliest source hinting at a connection between Shavuot and the revelation at Sinai is in 2 Chronicles (15:10-14), which tells that in the days of Asa King of Judah, loyalty to God was in steep decline. Thus, he called an assembly to strengthen their relationship with God:

10 They were assembled in Jerusalem in the third month of the fifteenth year of the reign of Asa. 11 They brought sacrifices to the Lordon that day; they brought 700 oxen and 7,000 sheep of the spoil. 12 They entered into a covenant to worship the Lord God of their fathers with all their heart and with all their soul… 14 So they took an oath to the Lordin a loud voice and with shouts, with trumpeting and blasts of the horn (trans. NJPS).

This symbolism of accepting the covenant and blowing the trumpets appears to evoke images of Sinai. Critical scholars suggest that the Second Temple-era author of Chronicles was projecting back into the First Temple period an experience that regularly took place on Shavuot in his own generation. If true, this would mean that by the early or mid-Second Temple period, Shavuot was identified with the story of the Sinai revelation.

The late Moshe Weinfeld (1925-2009), a critical Bible scholar, suggested another possible example of this Second Temple period connection. Weinfeld saw in Psalms 50 and 81 the poetic remnant of Second Temple-era annual reenactments of Sinai. The major difference was that the Ten Commandments now issued forth from Zion (50:2). While Psalm 81 has come to be associated with Rosh Hashanah, and is recited prior to blowing the Shofar, Weinfeld insisted that the Psalmist had Shavuot in mind.

A very different solution to the historicizing of Shavuot can be found in the Book of Jubilees, composed in Israel during the 2nd century BCE and representative of the proto-Essene community. This book regards Shavuot as a historical commemoration. Surprisingly, it is not only the Sinai covenant that Shavuot commemorates in Jubilees, but the covenant sealed by God in the days of Noah, the covenant of the pieces (ברית בין הבתרים), the birth of Isaac, and the covenant of Jacob and Laban.[2] All of these covenants are said to have occurred on the 15th of Sivan, the Shavuot of Jubilees and the Essenes.[3]

In the Essene community, the significance of Shavuot was not only as a remembrance of a past covenant, but it also functioned as a day of covenant for the members of the community. According to the Community Rule (סרך היחד), an important Dead Sea Scroll tract, an annual ceremony of entering into the covenant took place in the third month.[4] Other groups that seem to connect Shavuot with the revelation or covenant are the Samaritans[5] and even the early Christians.[6]

The Complex Connection between Shavuot and Revelation in the Talmud

Shavuot becomes firmly established as the holiday of revelation during the Rabbinic period. We can even see signs of this final solidification in the history of the liturgy. For example, according to the Mishnah, on Shavuot the Torah reading is taken from Deuteronomy XVI, a generic holiday selection (Megillah 3:5). The Talmud quotes a baraita in the name of “Others,” suggesting that the reading be switched to Exodus 19-20 (b. Megillah 31a). The opinion of “Others” is possibly the earliest rabbinic statement explicitly to draw the Shavuot-Sinai linkage, and it suggests amending the then-existing holiday observances to reflect the alternative non-biblical character of the festival.

Additionally, in the liturgy, Shavuot is merely “Yom Tov, called sanctified (ביום טוב מקרא קדש הזה)” and “the day of this festival of Shavuot (וביום חג השבועות הזה)” (Soferim 19:4). The expression that appears in our prayer books, “the time of the giving of our Torah (זמן מתן תורתנו), is not formulated until the Siddur of Rav Amram Gaon, a 9th century work. This very late development may also reflect the tension still palpable surrounding the acceptance of a post-biblical understanding of the holiday.

Nevertheless, the celebration of revelation on Shavuot was secure by this time. Rabbi Elazar noted that on Shavuot all Jews, even those who generally spend their holidays devoted to prayer and study, must indulge in a large repast to celebrate the anniversary of the giving of the Torah(b. Pesachim 68a).[8] Rav Yosef commented that he would have an exceptionally expensive feast because, but for his Torah study, he would be, literally just another ordinary Joe (“How many Josephs are there in the public square?” he asks.)[9] These rabbis emphasize the need to celebrate matan Torah on Shavuot.

Rabbi Mesharshiya noted that every holiday has a sin offering among its Musaf sacrifices. Only in the passage describing Shavuot is the word חטאת, sin offering, conspicuously absent. With aggadic flair, he posited that because Israel accepted the Torah on Shavuot the Almighty regarded it as though they had never sinned before Him (j. Rosh Hashanah 59c). The premise of this homily is that Shavuot, in its essence, and dating back to the Mosaic period, is a holiday commemorating the revelation at Sinai.

Contemporary Jewry experiences Shavuot as it has developed over the last 1800 years of rabbinic Judaism. As we prepare to celebrate Shavuot, it may well be that we do so in a manner considerably different from that literally ordained by Scripture. If only for this reason, we should have some appreciation of the long (and admittedly complex) interpretative history of how we got here.

[1] For another survey of many of the same sources, but coming at the question from a different angle, see Norman Solomon’s TABS essay, “Shavuot: How the Festival of Harvest Grew.”

[2] For more on Jubilees and Shavuot, see Michael Segal’s TABS essay, “The Festival of Covenants.”

[3] It is odd that the Sinai connection seems almost an afterthought or an accident. It seems reasonable to suggest that if the Shavuot-Sinai Revelation association had been widely accepted at the time of the writing of Jubilees, he would have directly addressed that issue instead of emphasizing the less significant Noahide pact.

[6] Some interpret Acts 2:1 to mean that the early church connected Pentecost with revelation, though other scholars disagree.

[1] For another survey of many of the same sources, but coming at the question from a different angle, see Norman Solomon’s TABS essay, “Shavuot: How the Festival of Harvest Grew.”

[2] For more on Jubilees and Shavuot, see Michael Segal’s TABS essay, “The Festival of Covenants.”

[3] It is odd that the Sinai connection seems almost an afterthought or an accident. It seems reasonable to suggest that if the Shavuot-Sinai Revelation association had been widely accepted at the time of the writing of Jubilees, he would have directly addressed that issue instead of emphasizing the less significant Noahide pact.

[6] Some interpret Acts 2:1 to mean that the early church connected Pentecost with revelation, though other scholars disagree.