The Urim veTumim have baffled traditional commentators through the ages and only more recently has modern scholarship shed partial light on what they were.

In the description of the choshen (breastplate) the Torah mentions a mysterious component that is to be put with it, called the  Urim veTummim (Exodus 28:30).

Also put the Urim and the Thummim in the breastpiece, so they may be over Aaron’s heart whenever he enters the presence of the Lord. Thus Aaron will always bear the means of making decisions for the Israelites over his heart before the Lord.

The Torah seems to take for granted that we know what they are and does not give any instructions for its manufacture, nor an elaboration on its precise mechanism and merely refers to them without describing them.  The only  place in the Torah they seem to be used, although by a slightly different name, is in Numbers 27:21:

So the Lord said to Moses, “Take Joshua son of Nun, a man in whom is the spirit of leadership,and lay your hand on him. 19 Have him stand before Eleazar the priest and the entire assembly and commission him in their presence. 20 Give him some of your authority so the whole Israelite community will obey him. 21 He is to stand before Eleazar the priest, who will obtain decisions for him by inquiring of the Urim before the Lord. At his command he and the entire community of the Israelites will go out, and at his command they will come in.”

What were the Urim veTumim? The answer has baffled traditional commentators through the ages and only more recently has modern scholarship shed partial light on this question.

In this essay I will lay out the various explanations offered by Jewish interpreters throughout history on what the Urim VeTumim looked like and how they worked, followed by a scholarly view on the matter.

The first view, espoused by the Talmudists (b. Yoma 73b) and amplified by Rashi (1041-1105) and Ramban (1194-c.1270) on Exodus 28:30, is that the Urim VeTumim was a piece of parchment on which the holy name of God was written.[1] This was placed inside the breastplate, which was embedded with precious jewels, engraved with the names of the tribes of Israel. When the High Priest consulted the Urim VeTumim for divine advice on a particular matter, the letters on the stones, charged with the power of God’s holy name, lit up and conveyed the answer.[2] The high priest then had to commingle the letters into a meaningful phrase, which formulated the solution to his quandary. According to another view in the Talmud, the letters actually jumped up and fused on their own.[3]

The Talmud (ibid.) explains that it was called Urim because it shed light on obscure matters (as in אור), and Tumim because its answers were whole, i. e. they always came to be true.[4]Ramban (Exod. 28:30) says that Urim and Tumim aptly represent the two components of the answers; the letters lit up, and then they were combined in a complete and meaningful manner. According to him, there were separate divine names called Urim and Tumim, which were designated for each function, respectively,[5] unlike Rashi’s view that only the Tetragrammaton was inscribed on the Urim VeTumim.

Model 2 – Another Name for the Choshen

According to Maimonides (1135-1204), who eschewed the entire concept of magical amulets inscribed with the holy names of God (see Guide, 1:61), the Urim VeTumim was but another name for the stones of the breast plate, which imparted the divine messages without relying on the piece of parchment.[6] R. Menachem Kasher notes that this view is also found in at least one Midrash and in the writings of several Geonim.[7]

R. Yosef Bechor Schor (12th cent.) proposes a rationalistic and practical explanation for the function of the Urim VeTumim.[8]  He says that behind the name of each tribe on the Choshen was placed a piece of paper on which it was written the exact boundaries of the territories allotted to this specific tribe. In the future, whenever a conflict would arise between the tribes over the precise boundaries, the high priest would easily solve the disputation by looking up the original boundaries recorded in the Urim VeTumim.[9]

Rav Abraham ibn Ezra offers an innovative suggestion of his own, the mechanics of which are as much mystery as the Urim VeTumim themselves (Exod. 28:6).[10] It seems from his explanation that the Urim VeTumim consisted of many pieces of expensive materials, some of gold and silver, which were designed in a way that came to symbolize the universe as then conceived. Ibn Ezra (1089-1164), an ardent astrologist, apparently believed that the Urim VeTumim worked with astrological power. [11] This interpretation is in keeping with ibn Ezra’s worldview; Ibn Ezra was an expert astrologer and wrote at least 12 books on the subject, including one on astrolabes (Kli haNechoshet).[12] 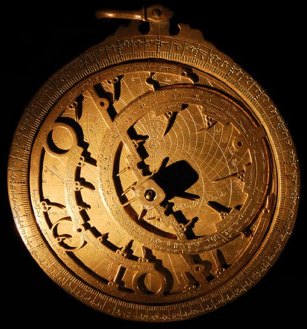 Ibn Ezra’s view was embraced by other medieval rationalist scholars. In a letter addressed from R. Shlomo ben Aderet (Rashba, 1235-1310) to Jedaiah ben Abraham Bedersi HaPenini (c.1270-c.1340), an avid rationalist and philosopher, Rashba lists the problematic views of the Jewish scholars who studied philosophy.[13] One of the heretical views he mentions is their belief that the Urim VeTumim was merely an astrological instrument like the astrolabe.[14] Surprisingly, Bedersi in his response does not deny this allegation; he only claims that the biblical astrolabe was much more powerful than the mundane astrolabe, because due to its Divine empowerment, it never failed to deliver a precise response, crystal clear to its reader.[15]

In the past century, scholars have found a key to partially uncover the mystery of the Urim VeTumim in Sam. 14:41.[16] The story in this chapter relates a war that Saul led together with his son Jonathan against the philistines. Saul forbade all the warriors from eating until the war was over. However, Jonathan was very weak and couldn’t resist a taste of the honey they’d found amidst the woods. Once Jonathan decried his father’s injunction, the war suddenly turned in the Philistines’ favor, and Israel suffered fatal losses much to the horror of their leader. Saul decided to cast lots to see who was causing the divine wrath. He placed himself and his son on one side and all of Israel on the other, and he threw lots to see if God was angry at him and his son or at the rest of Israel.  In his final preparations he offered a prayer to God that in our text consists of two words (1 Samuel 14:41):

This awkward sentence is translated by medieval commentators as a prayer that the lots should be perfect and reliable. But when modern scholars studied the translation of this verse in the Septuagint, they noticed that most of the sentence is missing in the Hebrew bible. After a reconstruction based on the Septuagint, the text reads:

In this passionate prayer, Saul is upset that God did not give him a clear answer when he previously consulted him. He implores God:

Apparently, Urim designated fault or bad, (probably based on the word ארור = cursed), andTamim implied good (probably based on the word תם = perfect). Saul wanted to see who is at fault. If Urim will be the result then it’s a sign that he or his son is guilty, if Tamim will be the result, the fault must lie with someone else among the Israeli nation.

In light of the reconstructed text, it seems plausible to surmise that when Saul “asked advice from God” he employed the Urim VeTumim, as in most other cases where the term וישאל באלהים is used, and The Urim VeTumim worked by throwing lots, which were probably two stones or tablets inscribed with the words “Urim” and “Tumim”. Perhaps whichever fell out first, or in proximity to the accused, defined the result. Note, it seems that a definite answer could not always be obtained from the Urim VeTumim, as in our case where Saul complained that God did not respond the first time, so it seems likely that using the Urim VeTumim was more complicated than throwing regular lots.

The technique of throwing lots is hardly foreign to the biblical milieu. The Bible often employs lots to render decisions on difficult matters, such as to decide which goat should be sent to Azazel and which one should be sacrificed for God on Yom Kippur, or to mete out the portions of the land to the tribes of Israel. Although we can imagine that the priestly Urim VeTumim ranked higher than regular lots, it is clear that results shown by every casting of lots were considered as divine messages, as the Bible explicitly says: “We may cast lots in out lap, but the LORD determines how they fall” (Prov. 16:33).

Yoel is a Satmar Hasid who has studied in yeshiva and kollel for many years and has taken an interest in academic Bible studies. See his TABS Essay, My Name is Yoel: I am a Satmar Hasid and a Bible Critic.

Yoel is a Satmar Hasid who has studied in yeshiva and kollel for many years and has taken an interest in academic Bible studies. See his TABS Essay, My Name is Yoel: I am a Satmar Hasid and a Bible Critic.