Unlike the other four chapters where the author speaks for the community, the third chapter of Lamentations is written as an individual lament. The chapter begins with “I am the man who has known affliction,” but who is he?

The Structure and Theme of the Third Lament

The third chapter of the book of Lamentations differs from all the other chapters in content and literary form. Its form is a tri-fold acrostic (alphabetic) poem, in which every letter of the alphabet opens three consecutive verses, containing altogether 66 short verses. The poet had to exercise special artistic skill to create a poem of coherent and meaningful structure.

In contrast to the other chapters, chapter three is not a communal lament, but a lament of an individual. In this lament, an anonymous (young) man (גֶבֶר) complains about his own heavy suffering brought on him by God. The lament does not mention any historical event concerning the fall of Judah and the destruction of the Temple, nor does it refer to any national entity, such as Jerusalem, Zion, or Judah.

Only one passage contains a communal confession of sins, and an expression of grief over the national disaster (vv. 40-51, covering the letters nun, samekh, pei, and ayin). On the other hand, the poet contemplates divine providence and the manner in which a person should accept suffering (vv. 25-39).

The contents of the lament can be summarized as follows:

I am the man who has known affliction under the rod of his wrath.

He continues with describing the afflictions meted out on him by God. The afflictions are described in a highly poetic language, full of similes and metaphors, for example:

Lam 3:9 He has walled in my ways with hewn blocks, He has made my paths a maze.

The man’s complaints are very similar to the complaints of Job about his own suffering (see e.g., Job 7:4-6; 16:9-22; 19:14-20), as well as to the descriptions of other similar “righteous” (or “pious”) sufferers in Mesopotamian wisdom compositions.

Because of the stereotypic and highly poetic style, the exact nature of the man’s sufferings cannot be determined; some passages point to a physical illness (vv. 15-16), others to captivity and incarceration (vv. 6-8). Clearly, the author has the feeling that God is angry at him for some unknown (or unspecified) reason, and therefore does not heed his prayers (v. 8). Consequently, the man has fallen into utter despair, almost losing all hope for divine help (vv. 17-20).

Since the time of the Sages, the interpreters of the Bible have puzzled over the identity of “the man” (הגבר) in this lament. Some modern exegetes resolve this issue by positing that the individual who speaks in the first person singular is a “corporate individual,” representing Zion or the people of Israel,[1] and thus the chapter is really, like the rest of the book, a communal lament. This interpretation already appears in Midrash Eichah Rabbah (3:1 “Ani HaGever,” Vilna ed.):

Rabbi Joshua of Siknin in the name of Rabbi Levi said: “I am the man: ‘I am indeed experienced in sufferings; what pleases You is beneficial to me!’”

A different version of this text (Buber ed., ad loc.), noting that the term “the man” (הגבר) is used of Job, compares Israel to Job:

Rabbi Joshua of Siknin in the name of Rabbi Levi said: “The community of Israel said to the Almighty: ‘Master of the World, I am Job, as it is said: “What man is like Job, who drinks scorning like water” (Job 34:7). All that you brought upon Job you wish to bring upon me!’”[2]

These above interpretations may be supported by poems such as Psalm 129, where Israel speaks in the first person singular:

Psalm 129:1 …Since my youth they have often assailed me,
let Israel now declare,

129:2 since my youth they have often assailed me,
but they have never overcome me.

Other moderns scholars explain the insertion of the communal confession and lament (vv. 40-51) in the two individual laments in this poem (vv. 1-39; 52-66) using the concept of “fluid personality,” in which the author identifies his own tragedy with that of the people, and the two entities – the private and the public – merge into one entity.[3]  A similar interpretation was offered already by R. Joseph Caspi (1279-1340):

“I am the man” – The intended meaning is that Jeremiah refers both to himself and also to our entire nation.

Thus, Jeremiah, the author of all of Lamentations according to Jewish tradition, is both the man individually as well as a stand in for Israel as a whole.

An Individual Lament of a Real Person

Most modern exegetes reject these corporate interpretations on a number of grounds, not least of which is that in the other laments in the book the individual who speaks in the name of the community in the first person singular is a female figure, בת ציון “The Daughter (of) Zion” and variants, whereas the “man” of our lament is clearly male (גבר).

Ṭhe majority of scholars therefore, understand the speaker as an individual who encountered in the past a tragedy similar to that of the people who experienced the destruction of the Temple, and he saw his personal tragedy as a punishment for his sins. This man now tells his people how he coped with his suffering through repentance and faith in divine redemption. The editor of Lamentations included the lament of this individual in the book in order to teach people how to cope with the national tragedy that they experienced so that they do not despair and lose faith in future redemption.

The medieval Jewish exegetes, who, following Rabbinic tradition (b. Baba Batra 15a and other places), attribute the authorship of the book to Jeremiah, assume that the prophet is simultaneously lamenting his personal sufferings[4] alongside the destruction which took place in his time. This interpretation was offered already by Rashi, who comments (ad loc.):

Most modern commentators and scholars have argued that the author was not Jeremiah, but some anonymous person who suffered. The aim of the author was to teach the people who experienced the tragedy of the fall of Jerusalem and the Temple how to cope with their suffering and overcome despair, through the example of a person who underwent similar tribulations. In this view, several suggestions have been offered for the chapter’s author:

These views are unlikely; the sufferings depicted here are expressed in very general, stereotypic and highly poetic terms, characteristic of the individual laments in the book of Psalms, and are not meant to be identified with the suffering of any historical figure.  Instead, the author wished to depict a typical righteous sufferer, who was afflicted by God, such as Job. This personality was intended to serve as an ideal example for each person in the community, who experienced the horrors of the destruction and the exile. From him they would learn how to overcome their despair and skepticism caused by the national disaster.[8]

“The Man” – Connection with Job and ANE Texts

This identification of “the man” is supported by the use of that term in the poetic chapters of the book of Job, where it is used by Job’s friend for Job, as noted by the rabbis above, and by Job of himself (Job. 3:3, 23; 4:17; 22:2; 33:29; 34:7, 9). Similarly, Mesopotamian wisdom compositions dealing with the problem of the “righteous (or god-fearing) sufferer,” tend to designate the anonymous sufferer as “the (young) man” (Sumerian šul or gurus, Akkadian eṭlum). For example, the opening lines of the Akkadian poem Dialogue Between a Man and His God read:

“The (young) man was imploring his god as a friend,
He was constantly supplicating, he was praying to him.”[9]

Likewise, expressions like “I am the man” (gurus-me-en), and “I am the young man” (šul-me-en) recur several times in the Sumerian wisdom poem Man and His God.[10] The author of the Sumerian poem, just like of the author of our lament, preaches the dogma of didactic wisdom that suffering is always a punishment for one’s sins, and therefore the sufferer has to keep praising his god and supplicating him, hoping for divine mercy and forgiveness and thus he can be assured of ultimate salvation.

These parallels from the book of Job and Mesopotamian wisdom literature strengthen the hypothesis that “the man” of our lament is a typical figure of a righteous sufferer. However, this man, contrary to Job, does not complain bitterly about his suffering, but accepts it as a just divine verdict, hoping for divine forgiveness and mercy. As such he serves as a more traditional model than Job, an ideal example and a source of comfort to the people who experienced destruction and exile.[11]

“The Old Jew” by Hermann Struck 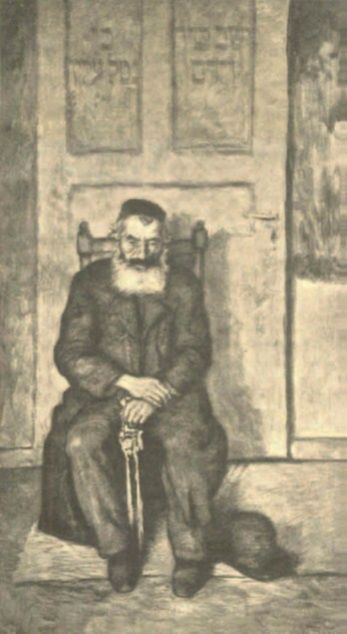 The original Old Jew, a large-sized oil painting (on the right), was created by the German Jewish artist Hermann Struck (1876–1944) in his hometown, Berlin, in 1911. The painting is currently on display at the entrance of the Faculty of Jewish Studies building at Bar-Ilan University, but is missing the Hebrew inscription (see pic at the top of this article) that originally appeared on the upper section of the painting (Lam 3:28): ישב בדד וידם כי נטל עליו “Let him sit alone in silence, for He has laid it on him.” Apparently, Struck’s choice of this biblical verse meant that he regarded his “Old Jew” as a symbol of Jewish life in the diaspora.(Photograph from Múlt és Jövő 4.2 ​[​February 1914​]​: 67​.​)

For the history of this painting and for possible reasons for the removal of the inscription, see, Mirjam Rajner and Ahuva Klein, “The Wanderings of Hermann Struck’s Ahasver: The Rediscovery of a Forgotten Painting and Its Evocative Transformation,”Ars Judaica 13 (2017), pp. 129-138.

Our Ancients said, that this scroll (Lamentations) was written by Jeremiah; if so, it was he who said “I am the man….”

Also ibn Caspi says this, as noted in the previous section.

Our Ancients said, that this scroll (Lamentations) was written by Jeremiah; if so, it was he who said “I am the man….”

Also ibn Caspi says this, as noted in the previous section.

Prof. Jacob Klein is Professor (Emeritus) in the Department of Hebrew and Semitic Languages and the Department of Bible Studies at Bar Ilan University. He holds a Ph.D. in Oriental Studies from the University of Pennsylvania and an M.A. in Bible from Bar Ilan University. He is the author of The Royal Hymns of Shulgi King of Ur: Man’s Quest for Immortal Fame ​and In Those Distant Days: Anthology of Ancient Near Eastern Poetry in Hebrew, and was the chief editor and writer for the Olam HaTanakh commentary on Job.

Prof. Jacob Klein is Professor (Emeritus) in the Department of Hebrew and Semitic Languages and the Department of Bible Studies at Bar Ilan University. He holds a Ph.D. in Oriental Studies from the University of Pennsylvania and an M.A. in Bible from Bar Ilan University. He is the author of The Royal Hymns of Shulgi King of Ur: Man’s Quest for Immortal Fame ​and In Those Distant Days: Anthology of Ancient Near Eastern Poetry in Hebrew, and was the chief editor and writer for the Olam HaTanakh commentary on Job.