An Interview with Yossi Klein Halevi

On His Personal Experience with Bible Criticism

Yossi Klein Halevi is a senior fellow at the Shalom Hartman Institute, a member of the Institute’s iEngage Project and a contributing editor to The New Republic. He holds a B.A. in Jewish Studies from Brooklyn College and an M.A. in Journalism from Northwestern University. His first book, Memoirs of a Jewish Extremist, was published in 1995. In 2001 he published At the Entrance to the Garden of Eden: A Jew’s Search for God with Christians and Muslims in the Holy Land. Yossi’s latest book, Like Dreamers: The Israeli Paratroopers Who Reunited Jerusalem and Divided a Nation, won the Jewish Book Council’s Everett Family Foundation Jewish Book of the Year Award for 2013. 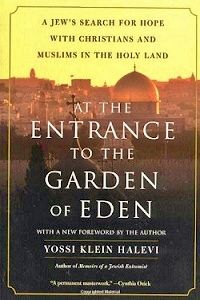 Marc Brettler: Yossi, a few weeks ago I was reading your book, At the Entrance to the Garden of Eden, and I came across your sentence “Though raised in an Orthodox Jewish home, I abandoned ritual as a teenager, having been shocked out of a religious complacency by biblical criticism.” I was not totally surprised by that statement, but I have a vested interest in exploring it. I was wondering if you would explain what happened; as we’re sitting here together you are wearing a kippah, so clearly something must have changed in the interim and I would love to hear more.

Yossi Klein Halevi: At some point in high school – I went to BTA, the Brooklyn Talmudic Academy – I read The Code of Hammurabi. What struck me was a certain similarity to Parashat Mishpatim, and I said, ‘So this is how the whole thing works.’ I probably didn’t even know the term biblical criticism, but that’s what I stumbled on. It was a shattering experience—not depressing but liberating.

The truth is, I was in any case looking for a way out of Orthodoxy, certainly the Orthodoxy by rote that I grew up in and was never inspired by, and I probably did not consider myself an Orthodox Jew at that point anyway. I had a very strong Jewish identity, but in those years, it was more nationalist than religious. So I came across the Code of Hammurabi and, without explicitly saying so, took this as my pretext for my ticket out.

As for Torah and revelation: The argument of the Kuzari definitely had an impact on me. But more basically, I came to the conclusion that some form of revelation must have happened at Sinai – some overwhelming moment that sent the Jewish people into history and sustained us for thousands of years.

Ani ma’amin b’emunah shlemah [I believe in full faith] that there was a divine revelation at Sinai. That doesn’t mean that I believe the entire Torah was divinely revealed, and I don’t care that it wasn’t. My faith in God and revelation is not impaired by the fact that I don’t believe that the Torah as we have it is a perfect revealed document. Something was given; whatever the something was, it developed into the Torah we know. I live very comfortably as a religious Jew in my way, who doesn’t need every letter and every space between words in the Torah to be divinely revealed. There are aspects of the Torah, like slavery, that are best passed over. I don’t know what that makes me denominationally. It’s enough for me to say I’m a religious Jew – a klal Yisrael Jew. My denomination is the Jewish people.

MB: I’m, obviously, deeply sympathetic to that position. You said that you just discovered TheTorah.com. I’d love to hear what you have to say about it!

YKH: Well, first of all, I’m thrilled that it exists. This shouldn’t be a secret in the Jewish world, this is really an important statement that you guys are making. It’s post-modern religious Judaism at its best. We are past the religious wars of modernity. It’s an extraordinary moment when we can look at the last few centuries of biblical criticism and as religious Jews say, ‘Of course!’ I believe in God, in revelation, in a divine purpose for the Jewish people in this world; isn’t that enough for a rich religious life? Do I need every rabbinic utterance to be divinely inspired? I feel grateful to be living in a time when one can be a religious Jew and not have to carry so much extraneous baggage.

MB: Do you think your life’s trajectory would have been at all different had you had discovered TheTorah.com during your crisis of faith at BTA?

YKH: Sure. It would have injected a complicated voice into this black and white dichotomy of “you either accept the whole package or walk away from it.” I walked away. In terms of rejecting observance, I went about as far as one can go—and didn’t look back. I would have benefitted enormously from another voice, and of course that wasn’t available then. But thank God you guys are here now.

A Humanist and a Bible Scholar: Interview with Tzemah Yoreh

Initiator of the Jewish Study Bible: A Modern Day Yitro

Why and how do so many Modern Orthodox individuals who participate in the modern world so fully, turn to fundamentalist apologetics in order to justify their belief in Torah-Mi-Sinai?

Academic Study of the Torah Is Essential, Not Just for Academics

Coronavirus: What We Can Learn from the Bible and the ANE